I was re-telling this story recently and the person I told it to said I needed to write it down.  So, here goes:

The boys were pretty little, Marshall was probably about 4 and Garrett about 3.  I remember the night before we had stopped to eat pizza on our way home from a camping trip.  At the salad bar, I asked the boys if they wanted mushrooms to which I got an emphatic, "No" from each of them.  I didn't think much of it and life went on.

The next evening, I was cooking spaghetti for supper.  The boys were playing in the yard.  They come running in the house, up the stairs and say, "Mommy, Mommy, we ate mushrooms!"  They were so proud of themselves while I had an overwhelming feeling of dread coming over me.  Being the good mom that I am, I got all the details; they both only nibbled about 1 square centimeter of a mushroom from the yard.  I then proceeded to call poison control.  I told poison control what happened and they asked, "What hospital are you going to?"  I said, "I have some syrup of ipecac."  They said, "What hospital are you going to?"  I said, "We have a minor emergency clinic in town that I can take them to."  To which poison control said, "What hospital are you going to?  We will call ahead first and let them know you're coming."

So, I pick what's left of the mushroom and put it in a paper bag. (Somehow, I remembered that not only should you take the mushroom in to be examined but somewhere I thought I read that it should be stored in a paper bag.)  We headed to the hospital.  As soon as we stepped into the waiting room, the receptionist said, "Those must be the mushroom eaters!"  and she ushered us back to the back.

Then began one of the longest nights of my life.  You see, they have no way to actually test the mushrooms I so painstakingly pick, put in a paper bag, and brought.  Oh, no!  The closest mushroom testing facility was somewhere way out on the East Coast.  Being in Texas, I asked if Texas A & M could test them.  But, no.  No one can test mushrooms anywhere, at least not for about 3,000 miles.  They gave the boys charcoal to drink.  Chris and I had to try to get them to drink the nasty stuff.  They kept turning the cups around and ended up getting charcoal all over their clothes as well as very black mono-brows!  They had to stay for observation in case the mushrooms were dangerous.  So, on one emergency bed, I put the pillow in the middle an had both put their heads on it with their feet going opposite directions on the tiny ER bed.  Finally, around 4:00 a.m.  They let us go home.

For the next several years, whenever we wanted to torture the boys, we would run around the house chasing them with a can of mushrooms.  ;-)  Neither one, eats mushrooms still to this day.  The stories afterward are that Garrett told Marshall to eat the mushrooms first.  They did report feelings of tingling after eating them.  But, that's about all.  Well, until the ER bill came for having to boys in at once.
Posted by Straw-Bearie at 7:00 AM No comments:

Email ThisBlogThis!Share to TwitterShare to FacebookShare to Pinterest
Labels: My Life 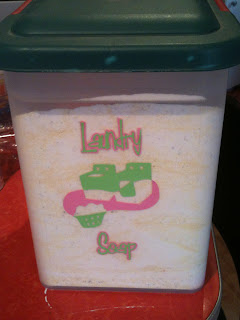 Chris thinks I'm crazy.  He came home today to find that I had made homemade laundry detergent.  He said in his wildest dreams, he never would have thought that is what I would be doing today.   Chris thinks I've gone off the deep end.  But, this really isn't that absurd for me.  When the boys were babies, I made homemade baby wipes.
But, I didn't stop there.  I made Cream of Something Soup Mix, Taco Seasoning Mix, Dry Onion Soup Mix, Chocolate Cake Mix, Cornbread Mix, and Tortilla Mix. And, I have homemade pancake and muffin mix that I use all the time.  Of course, I've never actually made homemade tortillas before.  No excuses now:  I have a mix!  I need to figure out which type of containers I like best.  If you go to the blogs with the original recipes you'll see all matchy and cute containers.  Oh, well.  I just gotta be me!  I'll have to remember to tell all of you how these work out later.  If you want copies of my recipes, just ask or go look at my pins on Pinterest. 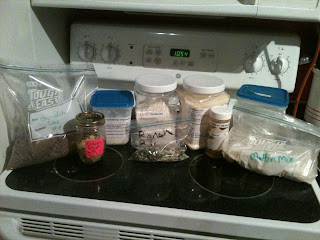