I made this card for my father-in-law for Father's Day this year after seeing something similar in a card making group on Facebook.  I posted this picture and I had several people ask me for directions. 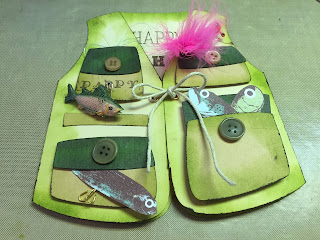 I made a video explaining everything I did below.  Hopefully, my father-in-law doesn't see this until after he gets the card.  LOL!


Posted by Straw-Bearie at 7:37 PM No comments:

Out of the Scraps Comes a Cute Heart Inspired Card

My craft studio/office is lovingly referred to by my children and husband as the "Black Hole."  It is the place to put stuff when no one knows where else to put it.  Things pile up and pile up.  I admit, I add to it, too.  I will go in to do a quick project and not put everything away, then I go in for another quick project, and before you know it my work table is piled a mile high.

After mostly cleaning it up, I made this video where I challenged myself to make a card just out of the scraps I found on my desk.

Posted by Straw-Bearie at 2:15 PM No comments:

Email ThisBlogThis!Share to TwitterShare to FacebookShare to Pinterest
Labels: Getting Crafty, Paper Crafts

Hubby came home the other day and said that his office was hosting a luncheon on Wednesday. Knowing that hubby is such a "man," I volunteered immediately to help.  If I left it up to him, there would be food, probably plates, iffy on forks, but no napkins or decorations. 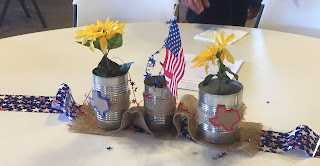 The luncheon was for his area's JPCA (Justices of the Peace and Constables Association). I knew I had some patriotic decorations, so there started my theme. By the way, none of the decorations cost me even a dime. 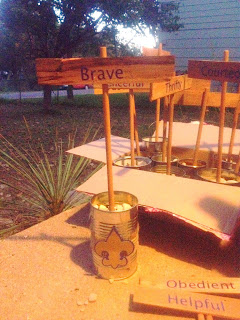 I decided to re-use the cans and burlap I made for my son's Eagle Court of Honor.  (Here's the link to that page.) I originally stuck the fleur-de-lis down with hot glue and knowing that my next son is getting close to his Eagle Scout, I didn't want to damage them. I heated up the hot glue with my heat gun so I could remove them without damaging them. Then, I cut out Texas shapes using Sure Cuts A Lot with my Cricut and attached them to the cans.

I went through my fake flower stash and found a sunflower garland that I had once hung as a window valence. I pulled off all the flowers on my other stems and replaced them with sunflowers from the garland.

In my patriotic decorations (and leftover school stuff), I found lots of American flags, a little ribbon, and that wire stuff with metallic stars.

I placed sunflowers and flags with garland in the cans held down with rocks. I took a picture at home of how the tables would look. I planned to use extra blue table cloths but when we got to the location, the tables were round and I only had rectangle table cloths.  Oops, no table cloths for this luncheon.  I also planned to layer the ribbon, burlap, and wire with the cans.  However, after arriving to set up, I discovered that I only had a small bit of ribbon. Add to that, I was originally told 20 people then it doubled! I figured I could decorated 4-5 tables. When we arrived 12 tables were set up. The back row didn't get decorations but the 8 tables in the front did. 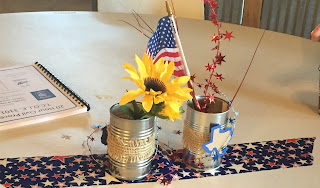 How? I improvised. Some tables got burlap, some ribbon, some 2 cans, some 3, and one table only got one can. All in all, it turned out really cute. I received lots of compliments. The facility was very rustic looking and the decorations matched perfectly; almost like I had planned it. Not too shabby for 2 days notice and absolutely no money! 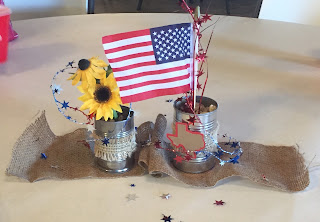 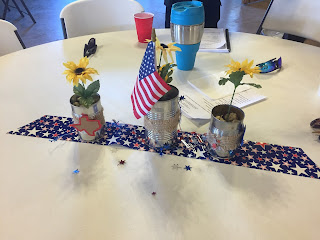 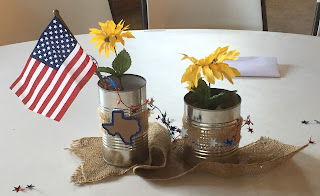 Posted by Straw-Bearie at 6:45 PM No comments:

Email ThisBlogThis!Share to TwitterShare to FacebookShare to Pinterest
Labels: Getting Crafty

My son graduated from high school last week and needs a bunch of thank you cards.  I just couldn't go and buy cards.  So, I'm in the process of making him some and he's in the process of writing them.  Hopefully, we will both finish with all of them before he starts college in the fall.

The card in the video is actually pretty quick and simple to make but looks great.  The idea is to emboss your cardstock and then rub it with gold gelatos.  This effect would work for any cards that you need to do multiples for in a short amount of time.

Posted by Straw-Bearie at 2:27 PM No comments:

Email ThisBlogThis!Share to TwitterShare to FacebookShare to Pinterest
Labels: Getting Crafty, Paper Crafts

Here are some quick and easy tags/cards for teacher appreciation using mixed media techniques.
Posted by Straw-Bearie at 8:42 AM No comments: